It must be at least a decade since I first read Brideshead Revisted and became aware of the concept of eating quail eggs. Plovers’ eggs are the more prominent egg in this amazing novel:

He was alone when I came, peeling a plover’s egg taken from the large nest of moss in the centre of the table … ‘The first this year,’ they said. ‘Where did you get them?’

‘Mummy sends them from Brideshead. They always lay early for her.’

He had little things delivered to his rooms: quails’ eggs, bottles of crème de cassis, tappenade and little cheese biscuits, and they ate them slowly, forgoing proper meals for the little savoury squares and the creamy eggs.

I never sampled the delights of quails’ eggs during my time at Oxford, but got my first taste of them at Portabello’s, a nice restaurant in the Summertown part of Oxford, a year or so later. They are such beautiful things, so small and perfectly formed and speckly.

I got these ones from Waitrose and I love the claim on the packaging: “Fabulous eggs by fabulous birds”. I agree – they are rather fabulous. I would say that their novelty is a major part of the appeal, but they do make great little ‘snackettes’ or a posh apperitif.

I don’t know whether they’re enjoying a surge in popularity at the moment, but I’m seeing them everywhere all of a sudden. That might just be because I’ve recently converted from supermarkets to farm shops, though.

I hard-boiled some to have with dinner the other night and served them on the table in their shells. It only takes about a minute or two! I put an extra bowl on the table to put the shells into and a small quantity of celery salt on a plate in which to dip them once peeled.

You could also fry them; I spotted this on Justataste.com: 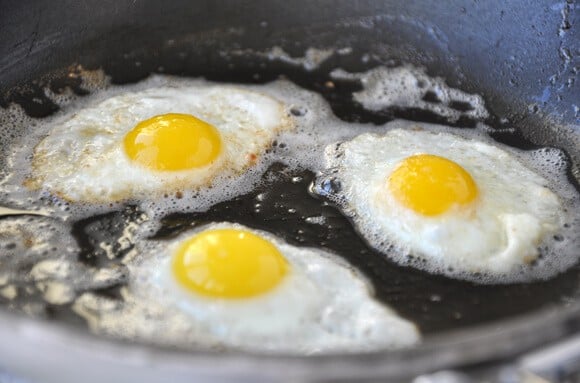 I think I’ll probably save that one for a hilarious practical joke next time Lee wants a fried egg!