Home » Travel » The magic of Christmas in Reykjavik
Travel

I’ll start this post with a confession: I’ve felt distinctly lacking in Christmas spirit this year. Having been feeling crap for quite a while, what I needed was a complete change of scene, so I considered where in the world I have felt most relaxed and my thoughts turned immediately to beautiful Iceland. A mental image of Reykjavik decked out for Christmas was all the incentive I needed to book a three-night mid-December trip, and with Lee too tied up with work to accompany me, my lovely friend Lucy joined me for the adventure.

As chance would have it, the weather gods decided that the day before I left for Iceland would be a good moment to dump a substantial amount of snow on the Midlands for the first time in five years, and for a moment, amidst the joy only waking up to snow can bring, I was a little concerned that we may not make it as far as the airport the next day. Happily we did, and following a two-hour snow-induced flight delay we were jetting off over the white-blanketed landscape bound for Reykjavik. Where, funnily enough, there was no snow.

Our hotel was just off the part of Laugavegur (Reykjavik’s main shopping street) where the shops and restaurants start, and setting out along it in the bracing Icelandic air was the perfect antidote to the weariness one invariably feels after a commercial flight of any duration. There were Christmas trees EVERYWHERE. 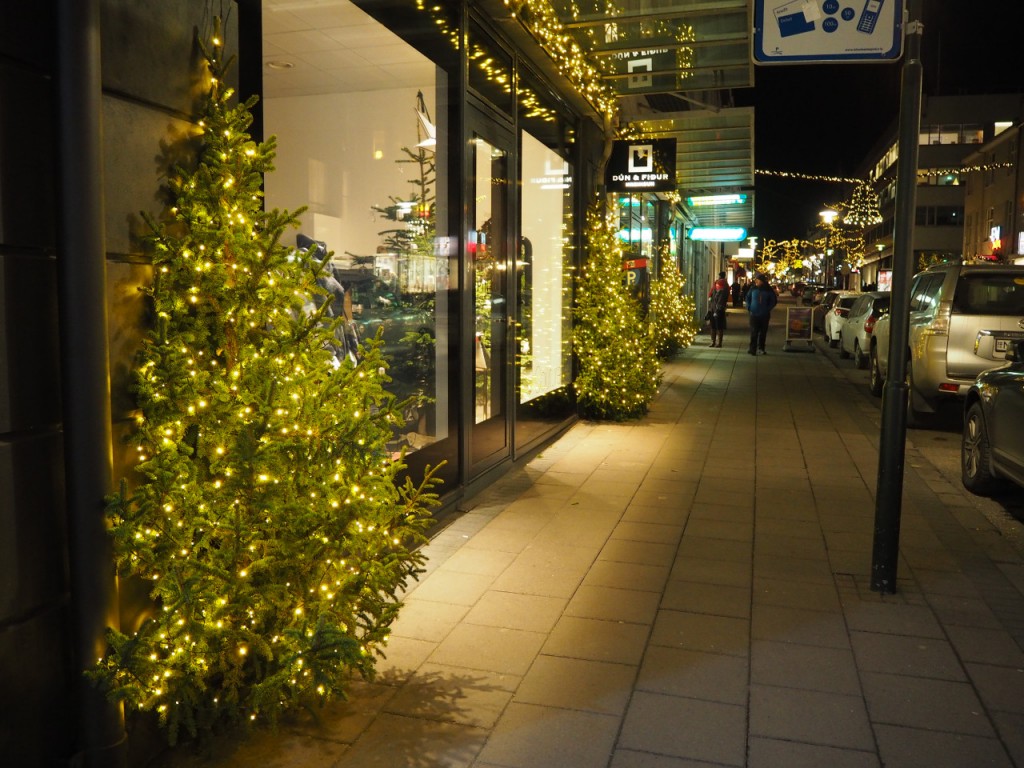 Reyjkavik’s older buildings are cute at the best of times, but add Christmas trees and holly wreaths and they’re perfect. 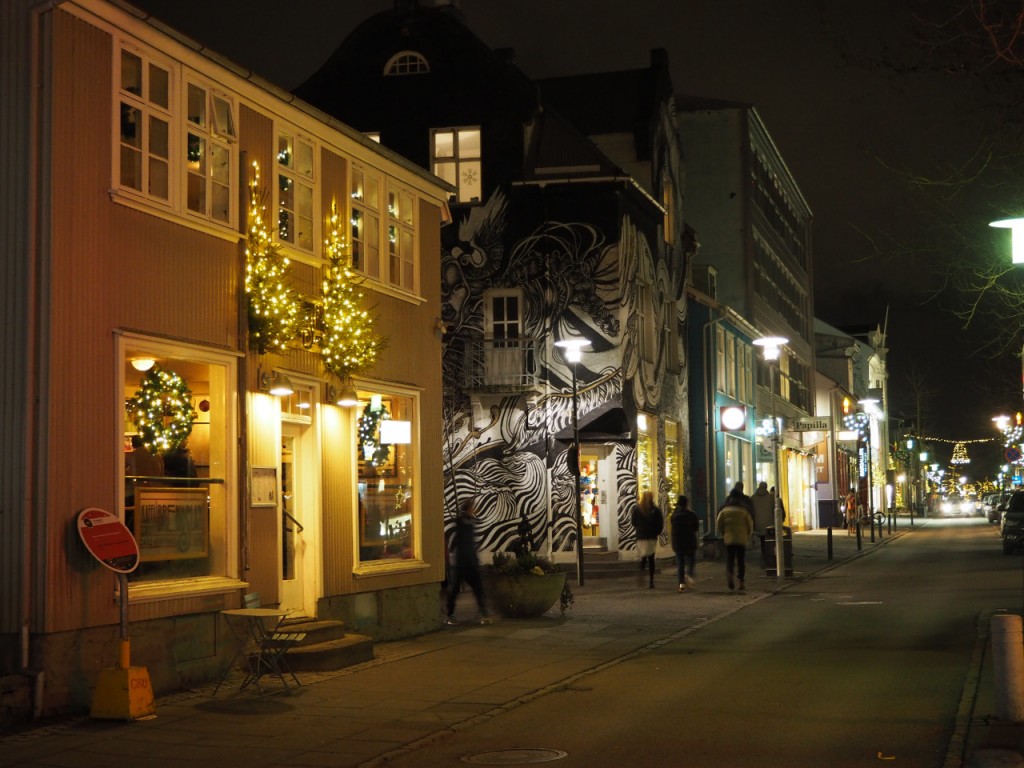 One of the things that makes Reykjavik such a great pre-Christmas destination is that it has several enchanting Christmas shops, of which this on Laugavegur is one. I loved the postbox where you can send off a letter to “the Icelandic Santa”. Christmas in Iceland is an interesting experience because they have what they call the ‘13 Yule Lads‘ – mythical characters with interesting names like ‘Candle Beggar’ and ‘Pot Scraper’, who are said to visit, a different one each night, in the run-up to Christmas.

Another thing I liked about Iceland at Christmas was that everyone seems to make the effort to decorate their houses and shops (it must be lovely when the nights are so long), and all their Christmas decorations, without exception, are in excellent taste. Nothing garish, flashing or inflatable; mostly just modest trees with clear lights. There’s beauty in simplicity. 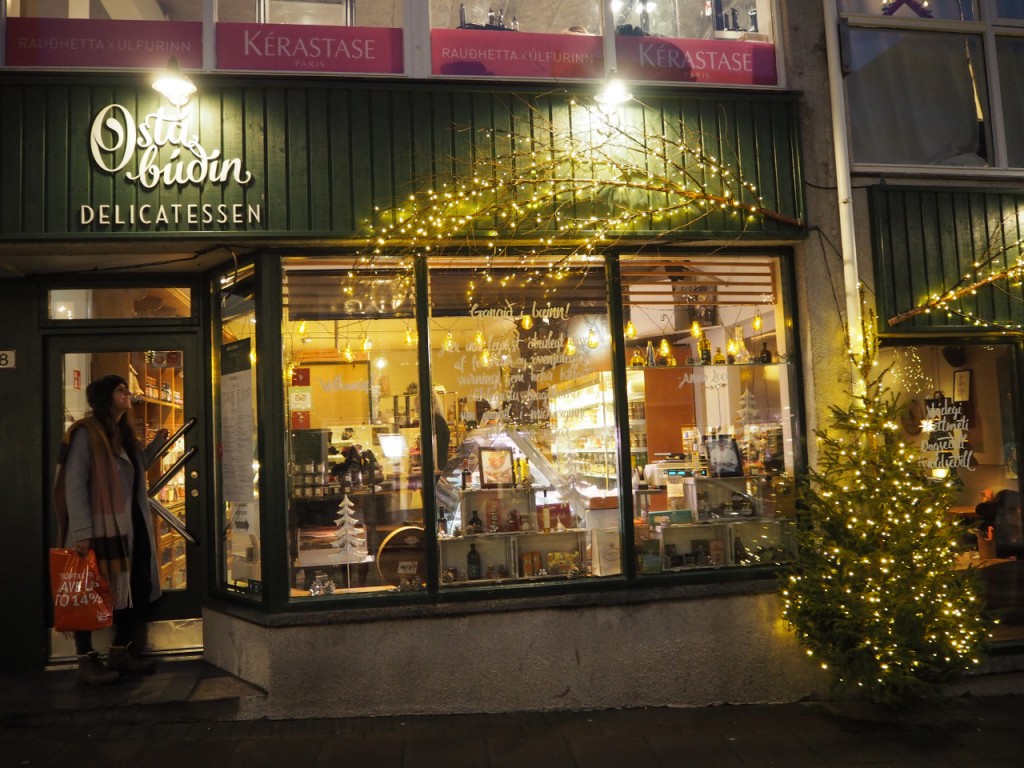 This street is called Skólavörðustígur (goodness only knows how to pronounce that), leading straight up to the city’s famous church, Hallgrimskirkja. See below for a daytime pic of the church.

Many of the shops seemed to be open late – perfect for some after-dinner souvenir shopping.

On our first evening we found a lovely little ‘winter village’ with an ice rink, which had been set up in a square close to the harbour. It had been years since I’d been ice skating, and it was such fun. It felt so festive to be wrapped up warm, skating around with Christmas music and lights. And mulled wine, of course! 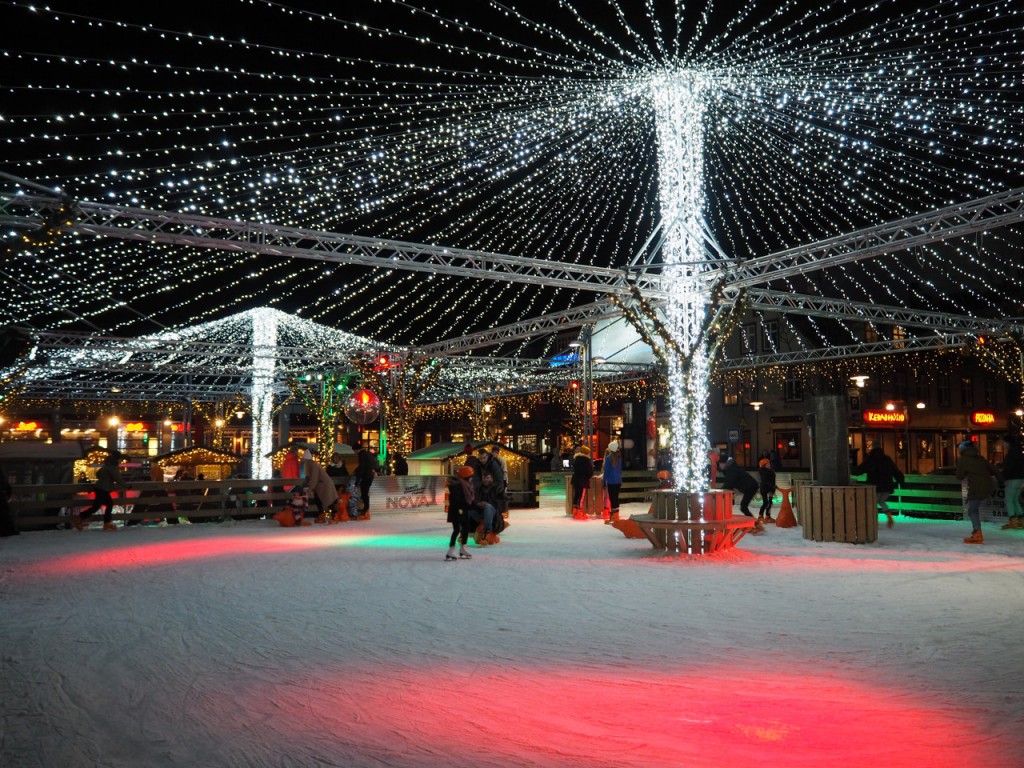 The daylight hours were very short, with the sun rising around 11am and setting around 3pm. Getting to Hallgrimskirkja in time to see the sunrise therefore didn’t constitute much of a problem, and the statue of Viking hero Leif Eriksson was beautifully silhouetted against the orange sky of dawn.

If you were in any doubt about how utterly delightful Reykjavik is, you only need to go to the top of Hallgrimskirkja to see this incredible view. I love the colourful houses, and the snowy mountains all around (just out of frame). 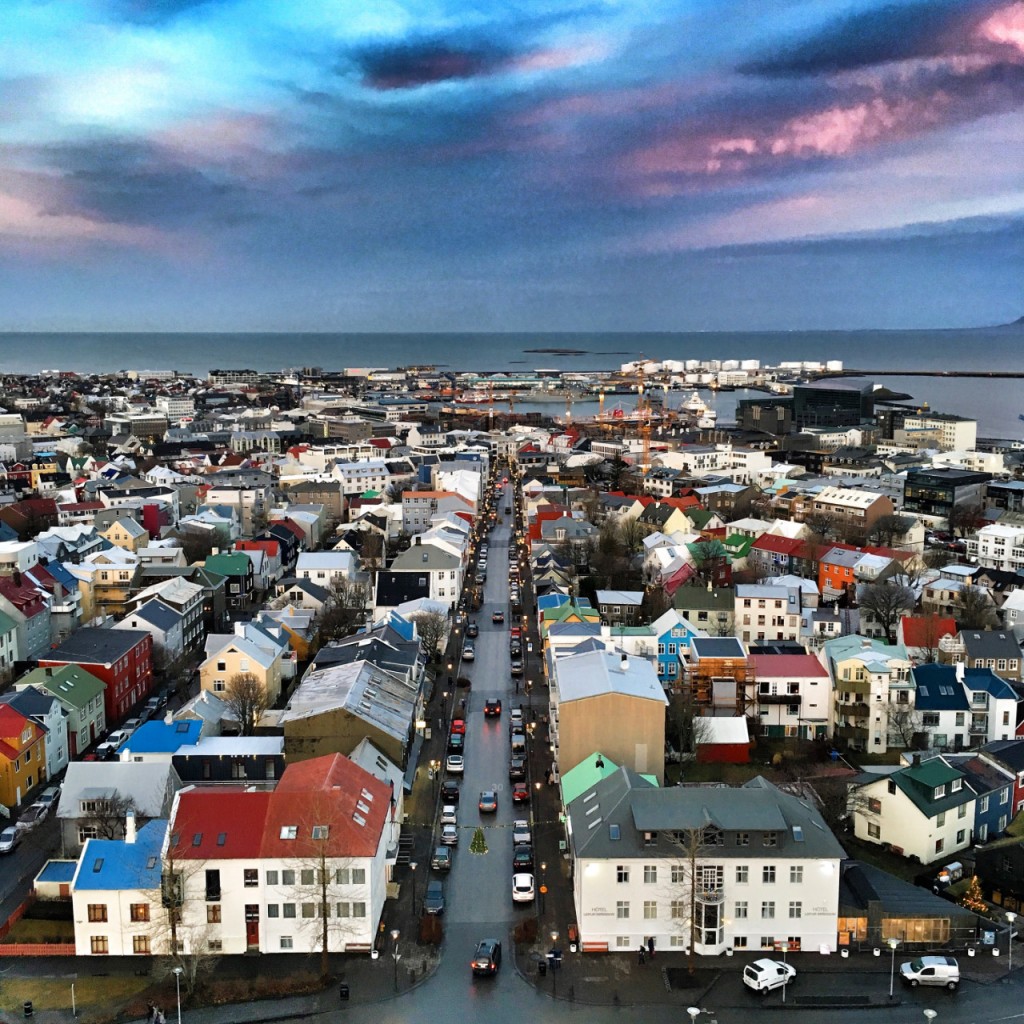 Here’s what some of those colourful houses look like from the ground, seen here when we were exploring downtown Reykjavik on the famous Reykjavik Food Walk, which I’ll write more about in a post of its own. Apparently these houses each fetch between $1 million – 3 million. Many are lived in by politicians and other well-paid people, and some have been in the same family for generations. 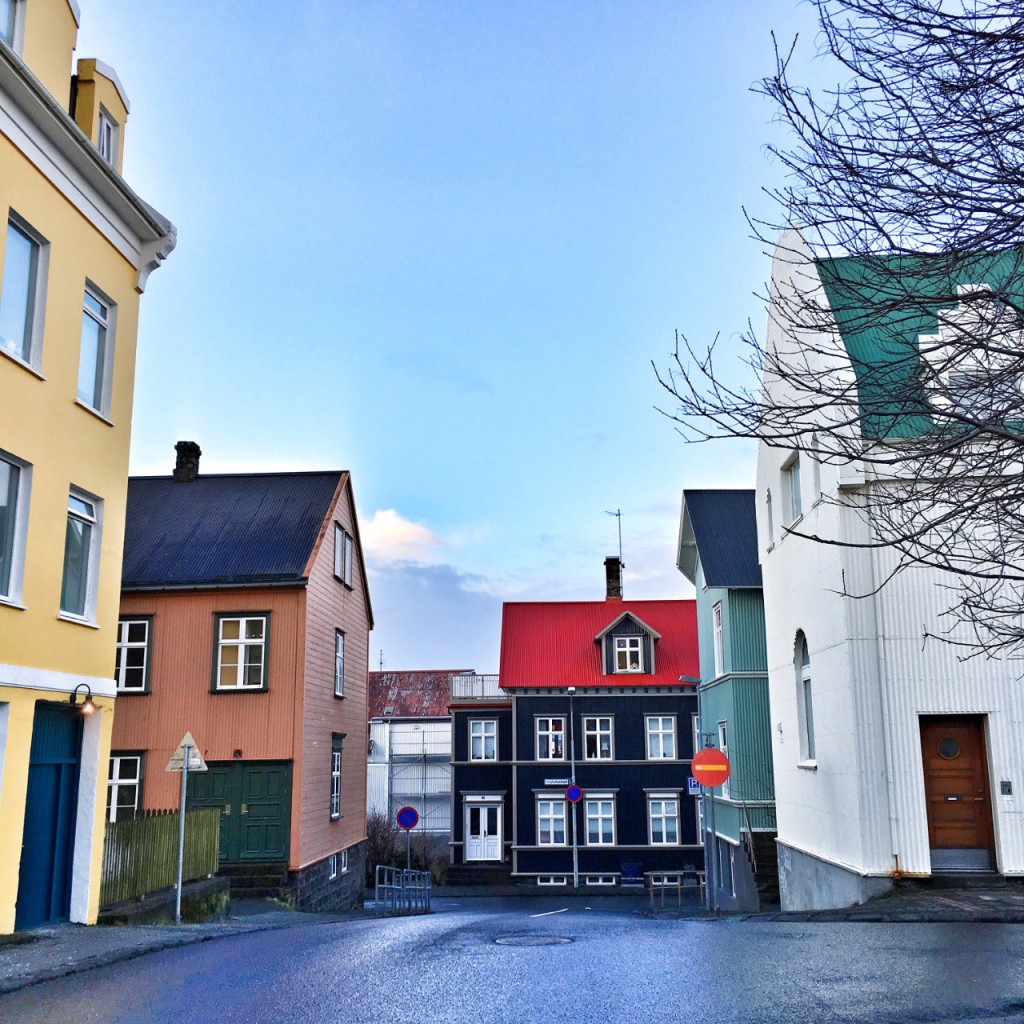 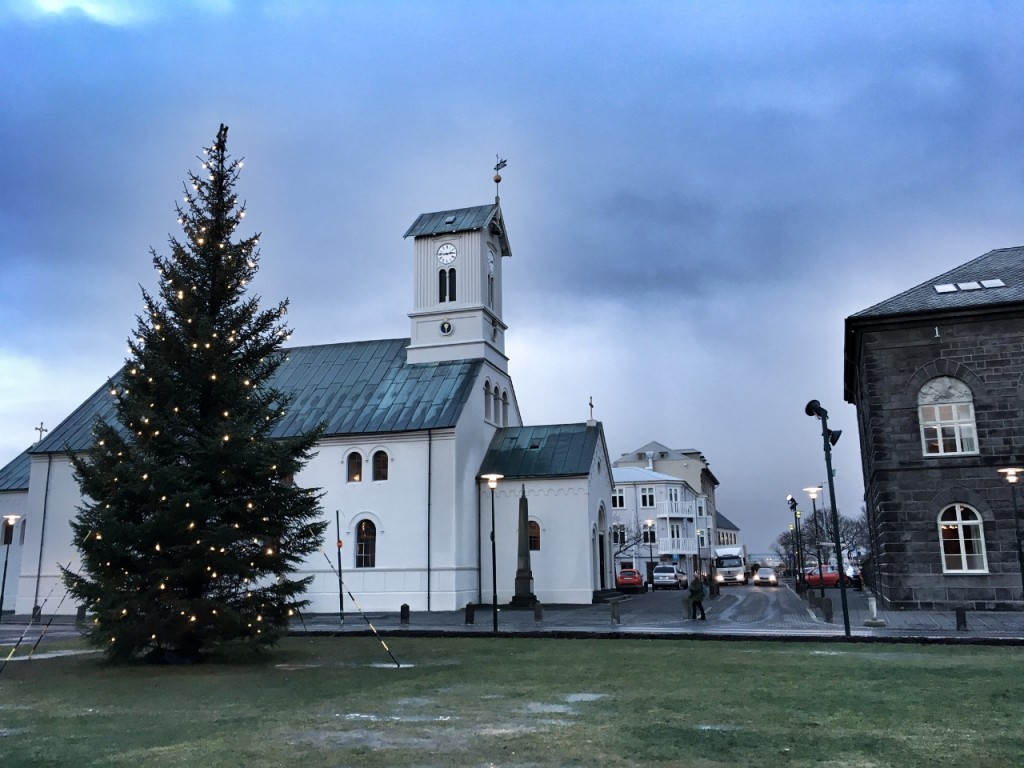 This is Harpa, the concert hall down by the harbour. 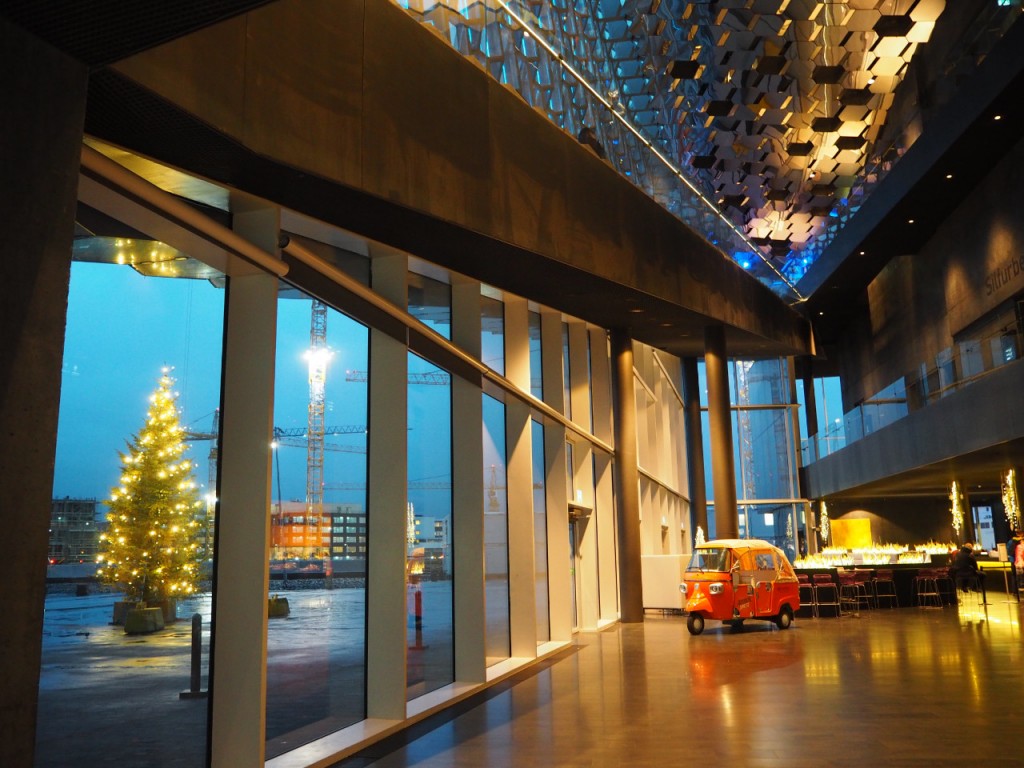 The geometric shapes make for one of my favourite Instagram-worthy views of Reykjavik.

Within Harpa is yet another marvellous Christmas shop, where I managed to resist spending £21 on a bauble in the shape of a hot air balloon. 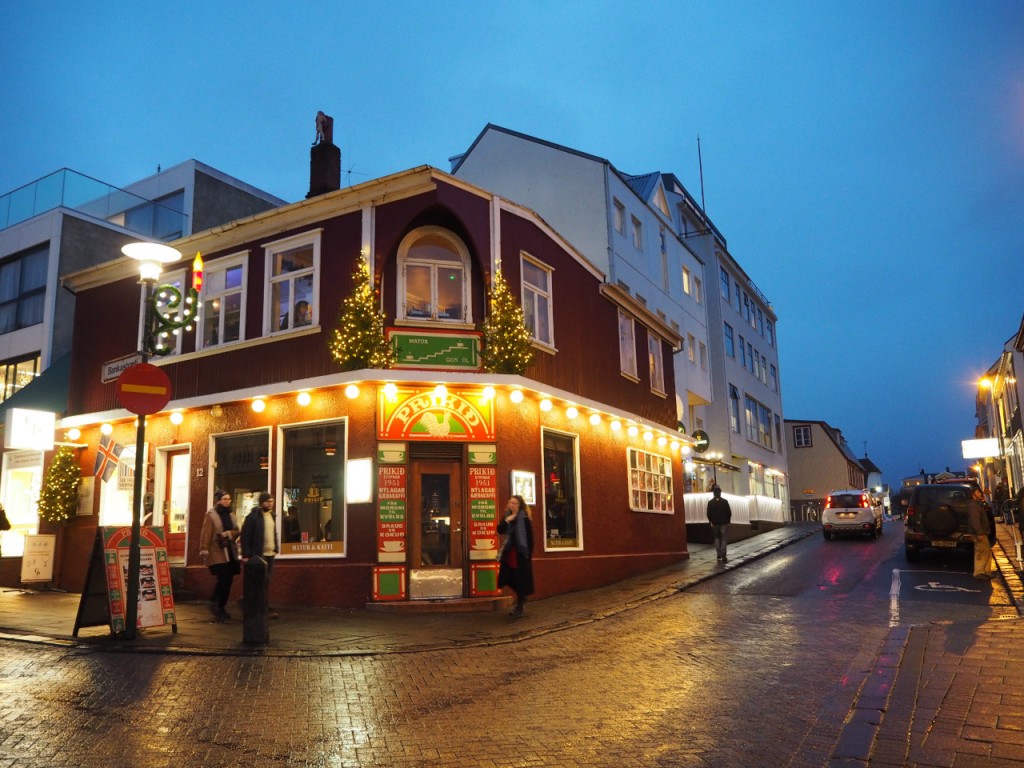 In the evening we were picked up from our hotel by coach and driven to the harbour to board a boat that would take us out into the bay, away from the light pollution, in the hope of spotting the Northern Lights.

As you can see, the boat is one that’s also used for whale watching! It’s quite good because you can divide your time between standing up on deck, where it’s freezing, or being warm inside. 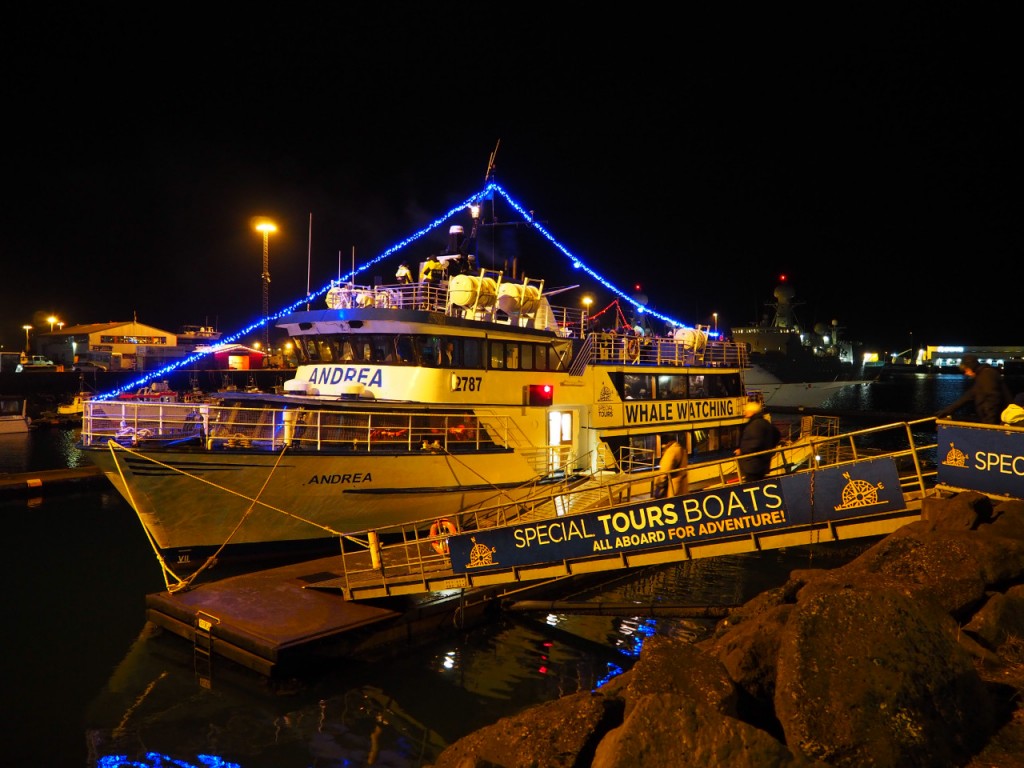 Sadly the aurora action wasn’t strong enough to see anything impressive. However, having seen the Northern Lights before, I recognised a thin wisp of white cloud as possible aurora and took a photo of it on my camera. Sure enough, it came out green on camera – so it was there, just sadly not strong enough to see green ripples with the naked eye. Ah well, there’s always next time!

We chose the perfect relaxing activity for our last full day in Iceland. I’ve written about the Blue Lagoon before, so do take a look at that post if you want information about visiting. The weather was much better this time than when I last went, and this time round I tried a Skyr smoothie (Skyr is a type of Icelandic yogurt, and the Icelanders are pretty obsessed with it) from the bar in the water. I liked it so much that I had a second one! 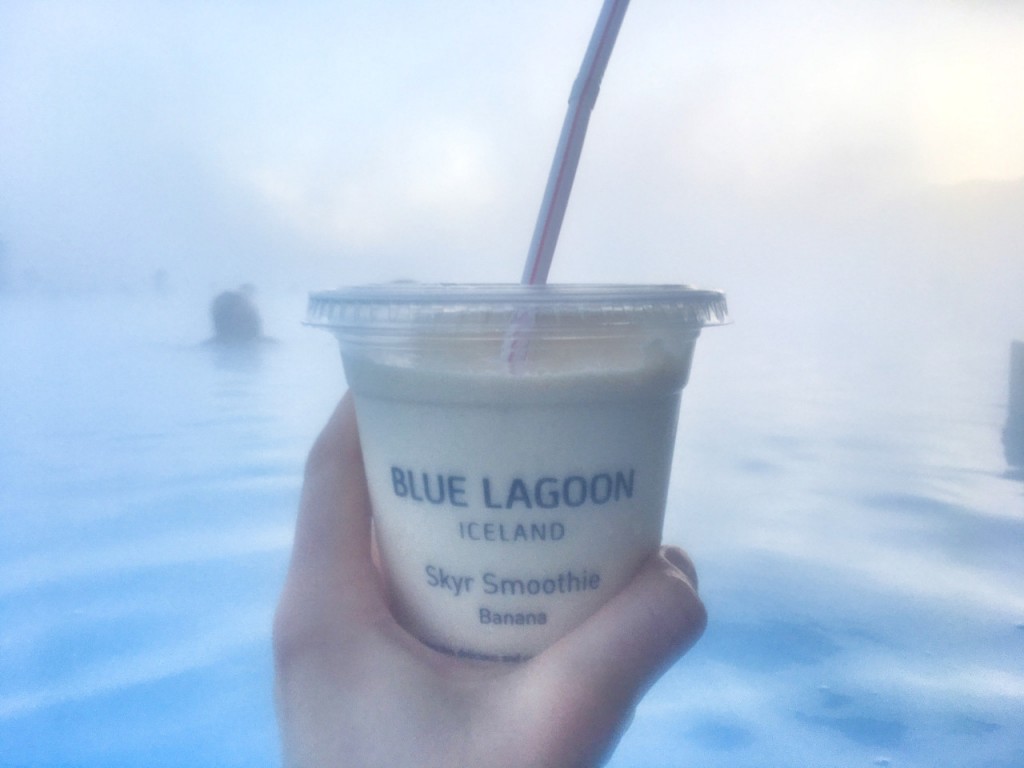 It’s so nice to be warm in the geothermal water when it’s cold outside. It does make it hard to muster up the courage to get out, though! 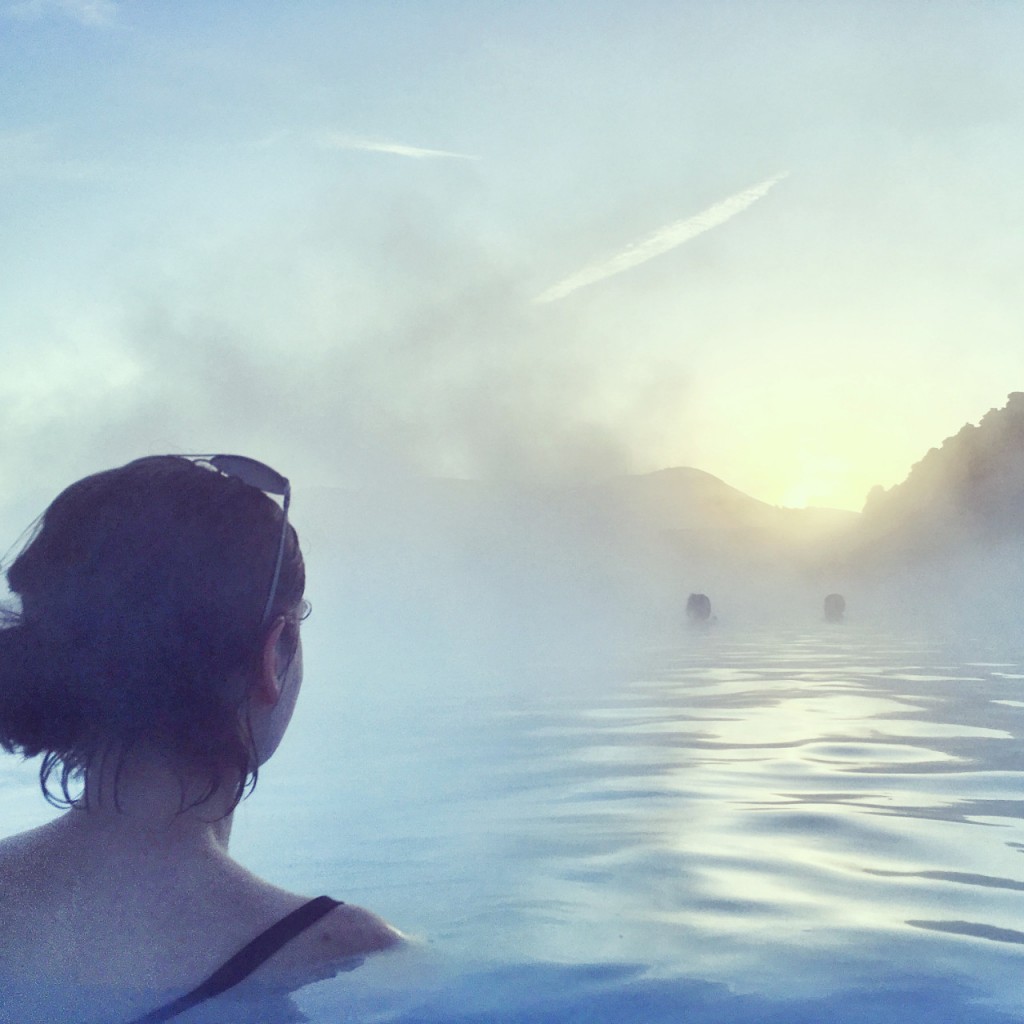 The rest of the time I was dressed like this! 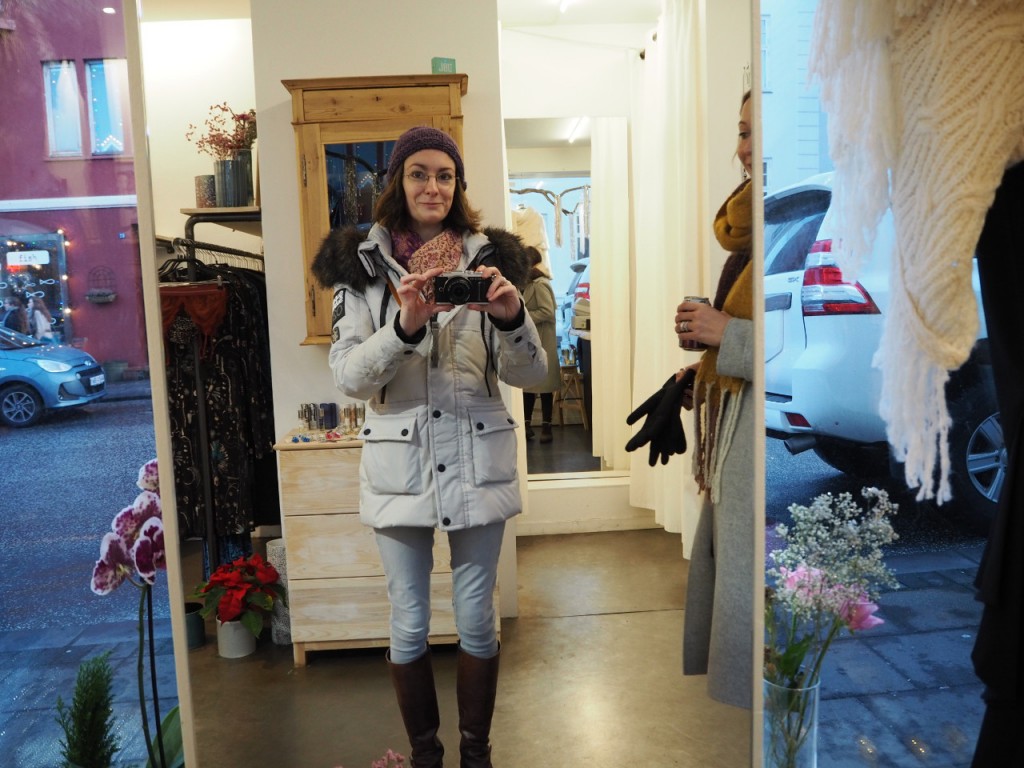 December is meant to be the coldest time to visit Iceland, but when we were there it was actually colder in the UK than it was in Iceland! Temperatures were about -2/3 at night and 2 degrees during the day, so not too bad at all (the forecast was -12 back home!). Seeing Reykjavik at Christmas is something everyone should do at least once, so if you’re ever suffering from lack of Christmas spirit – you know where to go.

December 20, 2017 by Rachel Ramsay | Comments Off on The magic of Christmas in Reykjavik