Home » Travel » Ypres: from the WW1 battlefields to the Last Post
Travel

Last year marked 100 years since the Battle of the Somme, and you may remember that over the summer of 2016 we flew ourselves to Amiens to visit some of the Somme battlefield sites, such as Beaumont-Hamel and Vimy Ridge. This year the most prominent First World War battle being remembered 100 years on is Passchendaele, also known as the Third Battle of Ypres. As we were going to be passing through Belgium en route to Holland for this year’s summer break, we stopped in Ypres for the first night to visit some of the First World War sites in and around the once-ruined city. Our first stop was the amazing Sanctuary Wood Museum.

Before you go outside to the trenches, the scene is set by a small museum of photographs and objects taken from the surrounding battlefield.

Some of the photographs are not for the faint-hearted – there’s some grisly stuff amongst the eerie images of mud and dead trees that have become so synonymous with the First World War. The boxes you can see at the end of the display case in the photo above have 3D slides made after the war, each one full of fascinating images that help bring history to life.

Stepping outside, the rusting remains of munitions and assorted other objects are an instant and tangible reminder that the seemingly distant, unreal world of those photographs was very much a reality.

That feeling of history made tangible is heightened by the fact that the landscape is still strewn with shell craters. Some of them are pretty hefty, despite presumably having slowly been filling up over the past century.

The craters and trenches here were preserved by the farmer who returned to the land after the war (it’s his grandson who still owns the land and museum). The surviving trenches – which are British – were cleared of debris and bodies, but were preserved in much the same state they were found in.

Before we’d even made it as far as the trench, we were intrigued to spot this tunnel entrance. There was no sign saying not to go in, so we switched on the torches on our iPhones and ventured into the darkness.

The tunnels extend a surprisingly long way, and you can’t see light at either end of them. There was more than one route, too, and I did worry for a moment that we might get lost! They’re quite low – not tall enough to stand upright in. They were apparently only discovered in the 1980s.

When we emerged, it was into the trench system. Remains of actual trenches are surprisingly few and far between, as many were simply filled in when farmers began the daunting task of making their battle-ravaged land usable again. (Of course, many areas of land remain unusable to this day because of the sheer volume of unexploded shells.) According to this site, Sanctuary Wood is one of the few places on the Ypres Salient where you can actually see original trenches looking roughly as they would have done.

Even the dugouts in the side of the trenches still survive.

We were lucky to have the whole place practically to ourselves, which made it easier to feel the weight of history. I was surprised there weren’t more people there, particularly in August.

It’s a poignant experience, walking through these trenches where so many men must have died.

I think these were the best set of trenches I’ve seen – better than those at Beaumont-Hamel or Vimy Ridge.

The metal poles with loops in are instantly recognisable as the stakes that held the barbed wire of No Man’s Land (the area between the two fronts). We’d seen them at Beaumont-Hamel, too. Apparently a lot of farmers helped themselves to them after the war was over and used them for their own fences. They’re a clever design because they could be screwed into the ground silently – you just push a bar through one of the holes and it becomes like a corkscrew – rather than having to hammer them in and make noise that would alert the enemy.

About half the way through our visit the heavens opened, giving a flavour of what it might have been like to be crouched in a muddy trench on a dreary, rainy day – albeit, thankfully, without the deafening shelling and the stench of death.

At one point Lee disappeared in search of another tunnel entrance, leaving me in a dugout in the side of the trench all alone with the view you see in this video.

Out on the top, this is the view looking back across the whole trench system. Incidentally, it’s thought that it was named Sanctuary Wood because the British had used the wood to shelter casualties right from early on in the war, when it was behind the British front line. Of course the front moved around a bit, and it was behind German lines for a bit later in the war.

I remembered learning at Beaumont-Hamel that the trenches weren’t dug in a straight line, but in a zigzag pattern, because explosions or gas would travel straight down a straight trench, and because an enemy would be able capture the whole trench rather than just a small part of it.

It’s an amazing place and I’d definitely recommend visiting. The rain, though inconvenient, definitely added to the atmosphere, and actually made us quite muddy with the rain and dirt bouncing off the side of the trenches. To have been stuck in them for any length of time, wearing the same wet, muddy clothes and boots for days on end, must have been awful – even before you add in all the other horrors.

A little way down from the museum is the Sanctuary Wood cemetery, where, as in the innumerable other such cemeteries dotted along the Western Front, the familiar lines of white gravestones mostly read “A Soldier of the Great War – Known Unto God” because the soldier’s body was never identified.

The sobering thing is that this is just one small cemetery of many, and all these stones only mark out the graves of some of those whose bodies were found in this particular area, whether identified or not. Tens of thousands more were never found, from the Ypres Salient alone, and their names are commemorated on the Menin Gate in Ypres (more on this shortly). The sheer scale of the loss of life is genuinely almost incomprehensible.

After that we went to Hill 60, the site of intense fighting in 1915. So-called because it’s 60 metres above sea level, it’s not far from the centre of Ypres and it’s free to walk around.

From the raised decking, you can immediately see the shell craters all around you. They don’t come out very well on camera unfortunately. We spotted the sheep grazing the pock-marked ground and wondered whether, as at Vimy Ridge, they were there to keep the grass short because it’s still too dangerous for humans to do so.

Big mines were detonated here, blowing the landscape to smithereens. Many men died here and their bodies were never recovered, so the whole area – now a memorial site – is effectively also an unmarked grave.

This marked out the front line…

…and on the other side, where there’s a step down, is where the German line was. Amazingly close.

After a sombre afternoon walking around the battlefields in the pouring rain, we were glad when the sun finally came out for an evening stroll from the B&B into Ypres (known to British soldiers during the war as “Wipers” due to its difficult-to-pronounce name!). We were staying ten minutes’ walk from the Menin Gate, where a ceremony is held at 8pm every evening to remember those who fell in battle. The lovely B&B owner advised us to get there at 7.30pm as it gets very busy, so we set out nice and early.

All the old-looking buildings in Ypres were meticulously reconstructed to old plans after the war, because the whole city was virtually obliterated by shelling due to its strategic position blocking the Germans from getting through Belgium into France. This is the back of the Cloth Hall (views of the front were somewhat marred by the presence of a garish fun fair, which juxtaposed wildly with the atmosphere of remembrance). There’s a museum in it – the Flanders Fields Museum – but we didn’t have time for that this trip.

This is the Menin Gate Memorial to the Missing. At about 7.30pm it was already filling up with people, so we grabbed a place under the monument to be sure of a good vantage point.

The monument is engraved with the names of over 54,000 British Commonwealth soldiers whose bodies were never found, and so who have no grave. This is just one small section of the monument, and you can see how many names there are here.

I didn’t film or photograph the ceremony out of respect, but plenty of others were doing so. There were four buglers who played in unison (here they are pictured after the ceremony).

At 8pm sharp they play, and I thought that it would be this that would make me well up, but in fact it was the soldier reciting that famous Laurence Binyon extract that did it for me:

“They shall grow not old, as we that are left grow old:
Age shall not weary them, nor the years condemn.
At the going down of the sun and in the morning
We will remember them.”

That always gets me. There were various other readings, too, and families placing wreaths for long-dead ancestors. Apparently they’re going to keep doing this ceremony everyday forever, so do go and see it if you get the chance.

Here’s the fun fair I mentioned… A bit incongruous! 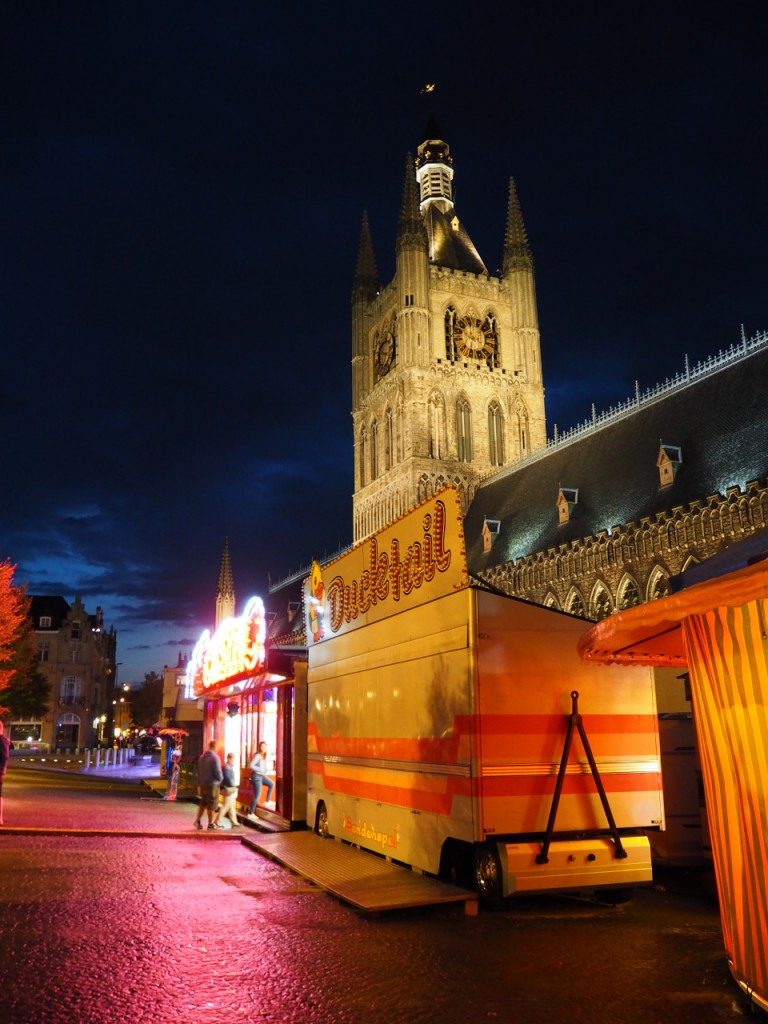 We had dinner in the main square of Ypres, where there’s a good choice of restaurants. The chap on the table next to us, dining on his own, struck up a conversation with us and we spent the evening chatting to him. He turned out to be from Chester-le-Street in County Durham and was cycling all the way from Naples in Italy back to County Durham. He was a most interesting chap and told us about how the war had been responsible for bringing his Belgian mother and British father together, as County Durham apparently took in lots of Belgian refugees during the war. It was a nice reminder, after spending the afternoon on the sombre battlefields, that some good did come from the horrors of the war.

It took just over an hour to drive from the Eurotunnel terminal at Calais to Sanctuary Wood Museum in Belgium, so you could almost do it as a day trip from the UK if you wanted to. I’d definitely recommend visiting Ypres, the Somme or both – it’s a truly eye-opening experience.

August 19, 2017 by Rachel Ramsay | Comments Off on Ypres: from the WW1 battlefields to the Last Post